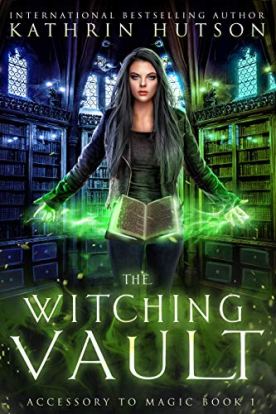 ‘The Witching Vault’ was written by Kathrin Hutson, International Bestselling Author, and was published in December 2020. I received this copy for free for an unbiased review. The Witching Vault is a contemporary fantasy that deals with a troublemaker-gone-good protagonist who is a witch, looking for a better life but stumbles upon something that is bigger than herself.

The front cover is an attractive design, that is visually stimulating and shows the magical theme that runs through the book. Right from the start we get a sense that the main character, has a chip on her shoulder and she is running away from a past that she wishes she could forget. The setting in Chapter 1 was solid, we knew that the character had a strong sense of right and wrong but can get seduced by going down an easier path, a pattern she is trying to break. She is searching for a job, and decides a job in a bank is harmless enough for her to pursue a career in.

“Her nose wrinkled at the thought of standing behind a desk all day, handling people’s money and pretending to smile while counting down the clock.” (p. 1, ch.1)

We get a good description of the bank building when Jessica approaches it: it’s an overbearing, run-down building that isn’t well-looked after and as she enters the threshold, the building greets her with a shock of electric magic. Unbeknownst to her, the building is full of magic as well as mystery and the owner, Tabitha, matches the buildings aesthetic perfectly by her wild nature and overly-eccentric behaviour, appearing as though she is mentally unhinged.

I got the sense that Tabitha was partially inspired by Nanny Ogg, an eccentric old lady from Terry Prachett’s Discworld series, only Tabitha is more batty and crazy. The likeness matches with both characters hoarding knick-knacks and random trinkets which are dotted around the bank. Tabitha’s personality is wise, as much as she comes across as wild and actually unhinged, there is a feeling of wisdom about her that Jessica mistakes for insanity, being masked by her wild behaviour and tendency to talk to herself.

Whilst reading I knew something was not quite right about Tabitha and the bank, that something felt rather ‘off’ about the bank. I felt that the description of the bank could have been taken straight from Harry Potter and the Philosopher’s Stone, and until I ran into a handful of curse words in the main body of the book I thought that this could be aimed at children. The amount of detail of the bank, Jessica’s surroundings and emotions are equally explored efficiently, and I felt the same feelings of wonder and frustration that the main character experienced as I moved through the book.

The flow of the book did read well, but I was a little thrown when I met these curse words as I had in my mind this book would be suitable for 12+ year old readers, but turned out to bet something I would not recommend to a child under the age of 16. The level of description used is good and helped me ‘see’ each scene in my mind as I read on, and the language used in the book was easy to read: in fact I ripped through the book in just a few hours. The whimsical description and detail of the bank owner and the bank itself, was light-hearted and fun, which would naturally draw in a younger audience. I do feel that if all the bad language were to be taken out that children of all ages would enjoy this book very much, as well as a young adult and adult audience. After all, the likes of Harry Potter reaches all ages so I do feel that the use of words rules out a specific audience, which is a shame as the author may benefit from this as the younger audience is already ‘prepped’ for this type of read. Fantasy, as this series identifies with, is very popular among children and is the most common genre for children to read, so ruling this out may have been a bad idea (The Conversation, 2014).

The addition of other characters was exciting: customers. The author foreshadows, using Tabitha, that no one who enters the bank is trustworthy, leaving a question mark of mystery in the air. The answer isn’t presented for some time, and the reader is kept on tenterhooks in the need to know what’s going to happen. The characters she meets, who are clients of the bank appear ‘tricksy’, as Smeagol would say: they want something from the bank, and Jessica doesn’t know what or why. To me this was infuriating, we are teased with something that is referenced to a lot, but not given the treat of knowing what it is that these customers want from Jessica.

It isn’t long until we see that Jessica has been tricked into working at the bank, making me feel that no one she comes into contact with, including Tabitha, can be trusted. Tabitha dies the day after Jessica starts work, and it isn’t long before we find out that the bank is sentient – which I really liked the idea of. Of course the reader is privy to this suspicion and I had already drawn my conclusions: that the bank chose Jessica, a correct evaluation. While some people might think that guessing what’s going to happen in the book is negative, this isn’t necessarily a bad thing as it’s engaging the reader into the story more. I think if you want a book of suspense, this doesn’t tick that box, but it still doesn’t take anything away from the enjoyment of the read. I found myself “ooohh”-ing and “aaahh”-ing, satisfied that what I was seeing in my head was actually coming across the page.

Upon conclusion, there’s much that I want answered. A pet lizard that lives at the bank, of which I have drawn up my conclusion as to whether it’s the original owner of the bank, cursed with forever overseeing the bank change through time. Also, I still am none-the-wiser as to what the Gateway is… it is a mystery that I HOPE is explained more in the second book as I really want this answered after being teased the whole way through the book! I will be buying the rest of the series as I’m curious to see the conclusion of what happens with Jessica and the shady characters she meets whilst working at the bank. Is she destined to work here forever, never to be able to relax and trust others? Or will she be able to detach herself somehow from the bank? And WHAT is the Gateway?

This book would satisfy those looking for an easy read, something they can feel they can connect with the characters quickly and look forward to a new world full of magic and mystery. There is a description of death and gore, use of swear words and mild sexual references that may evolve in the next few books. I was impressed that someone has created a new world encompassing the popular world of fantasy bringing out new creatures with fresh ideas behind their design. This book is steeped in contemporary fantasy, where magic is all around us and is the perfect form of escapism (The Guardian, 2007). I have often dreamt of a world that includes magic where people have different abilities, but all are vital to society and where readers can fully involve themselves in something fantastical. I do believe that The Witching Vault shares a similar likeness.

Theme: Based upon the genre of contemporary Fantasy, there are numerous descriptive ideas that are fresh to me, being an avid reader in Fantasy and Sci-Fi. This contrasts nicely with a mundane idea surrounding a bank, it livens up the subject greatly.

Description: The author uses suspense and mystery to tell the story. Behind the suspense there were no answers as to why this is making the reader feel tense, but this may come to light later in the series. The mystery was appropriate, and gave me some answers as to what was going on with the death of Tabitha making me feel satisfied regarding this aspect in the final chapter.

Narration: The author tells the story through 3rd person and we see that the bank itself is sentient, speaking to Jessica in her mind which was communicated in a humorous manner. The book follows the feelings of Jessica, tracking her thought processes making her a thoroughly likeable character.

In addition to writing her own dark and enchanting fiction, Kathrin spends the other half of her time as a fiction ghostwriter of almost every genre and as Fiction Co-Editor for Burlington’s Mud Season Review. She is an active member of the Science Fiction and Fantasy Writers of America and the Horror Writers Association.
Kathrin lives in Colorado with her husband, their young daughter, and their two dogs, Sadie and Brucewillis.
For updates on new releases, exclusive deals, and dark surprises you won’t find anywhere else, sign up to Kathrin’s newsletter below.

The Conversation (2014) Children’s Fantasy Literature: why escaping reality is good for kids. – https://theconversation.com/childrens-fantasy-literature-why-escaping-reality-is-good-for-kids-22307